Despite the fact that gender equality still exists, the engineering and trade profession is attracting more women day ...

Despite the fact that gender equality still exists, the engineering and trade profession is attracting more women day by day.

A lot of innovations that we use today owe credit to women engineers. Despite the fact that gender equality still surfaces in many areas, the engineering profession is attracting more women day by day.

It’s true that for many years, women have been underrepresented in STEM (science, technology, engineering, and mathematics). But, things are changing now. Now, more and more women are entering the engineering landscape without worrying about gender stereotypes.

Keep reading to know how top women engineers have shaped the world. They are not just engineers but also mentoring other women to do so as well.

About 21.80% of women work in the engineering field, this includes trade and construction. Forty-six per cent of girls 11-14 want to be engineers, compared to 70.3% of boys.

The new study finds that the number of female applicants for engineering courses has nearly doubled in the last decade. The figure has grown from 25,000 to 50,000 applications.

Undoubtedly, engineering courses are receiving four times more male applicants than female. The research analysing UCAS data found a significant increase of nearly 96 per cent in women undergraduate applications through UCAS for engineering between 2011 and 2020.

The following graph shows the subject breakdown among female graduates. It shows that women are equally interested in all STEM courses. 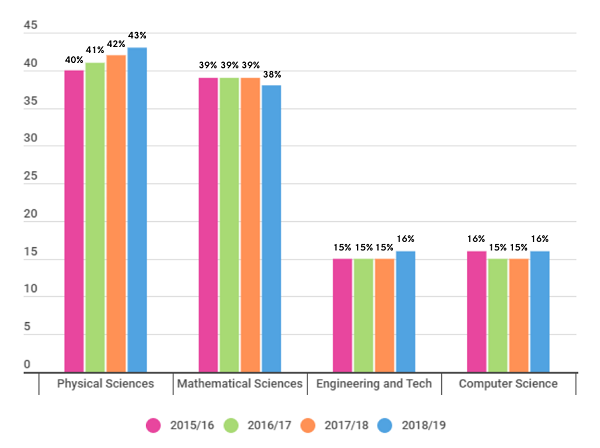 There are many factors that contribute to this growing, positive trend. There are many efforts to encourage women in the field of engineering. Introducing STEM subjects earlier in students’ academic careers, women's likelihood to make a career in engineering is equally high. In addition, the trade career is also attracting British women.

Need of More Women in Engineering

Engineering is a diverse area and offers numerous opportunities to do something that could change the world. But the lack of women in the sector is a problem that needs to be addressed.

Jo Foster, - equality, diversity and inclusion manager at Institution of Engineering and Technology (IET) - says lack of women is leading to the shortage of national skills. We have to resolve a lot of local and international problems, and we have not enough engineers to do so.

Jo adds that we want to make engineering a lucrative career for women. There are already hundreds of things that women engineers are doing, from designing future smart cities to helping advance healthcare technology.

Campaigns and Awards to Encourage Women into Engineering

Many international-level initiatives are in place to encourage the importance of women in engineering. Some of these include:

Evidence demonstrates how greater gender diversity makes businesses more productive and responsive to their clients. As female participants are increasing in the engineering field, companies should be hiring and retaining female talent. Failing to do so can make you leave behind the competition.

Ever lost a job, project or contract after expending lots of effort in pricing? Our tips can help you get more leads.

8 reasons to hire an apprentice this year

Powered Now the Gas Engineer Software looks at the benefits of hiring an apprentice.

How to hire an apprentice

Powered Now the Gas Engineer Software looks at the process of hiring an apprentice.

Get notified on new trade insights

Be the first to know about new trade insights to build or refine your business with the tools and knowledge of today’s industry.